It doesn’t matter where you go traveling and where you coming back from, after two hours in the holy land, and the vacation seems so distant and fussy, as if it never even happened in the first place. But being patient is worthwhile, and as I’ve learned, after four or five weeks, when the pictures and experiences settle in my subconscious, suddenly everything comes back to me. Maybe it’s the nice autumn air that finally arrived, and brought with it memories of those moments of peace and quiet. So “after the holidays”, and after the aftershock of “after the holidays”, I decided to not let that sweet vacation’s memories escape my mind, and share all of the clear Mediterranean inspiration, with some suggestions on the side.

Our last visit to the Cyclades Islands was on our honeymoon, more than twenty years ago. For a long time, we dreamt of another vacation on those enchanted beaches. Blue Mediterranean sky, white houses and excellent simple food, with a lot of wine. Collecting shells, counting stars and forgetting the day of the week. And so we returned with fond memories, with a longing to the simplicity, ambiance and beauty at the heart of the Mediterranean Chic.

Just at the start of the holidays we flew with an extended crew, with the children as well as an impressive representation of the extended family. Twelve people for a two-week vacation, starting and ending in Athens, with a week in Paros and four days in Mykonos in the middle. A different kind of experience, focusing on the moment rather than on “doing everything”, creating opportunities to get to know one another, but also creating freedom, sometimes away from one another. Because traveling in a large group can be both exhausting and difficult for everyone involved, in more than one way.

To Paros we arrived after a five-hours long ferry cruise at the very end of the season. Crisp air, a warm sun and a gentle caressing wind. We were lucky and the weather was indeed perfect. For me it wasn’t summer-y enough for a swim, but the boys were braver than me and spent as much time as they could in the pool and the sea.

(Those are the original colors, #NoFilter, as they say in Instagram-talk)

The end of the season means a lot less tourists and crowds, more quite, but also less shops and restaurants, so if it means a lot to you, you should take it into account. Because with the end of the season most of the islands close almost entirely, many of the residents moving back to the mainland, the shutters closed and everyone going into winter-awareness mode with strong winds and whipping rain.

I fell in love with Paros on first sight. The houses and streets were extremely clean and well cared for, showing a culture of community and respect by the locals both to themselves and to the tourists on the island. Everything is done with full attention and meaning.

The harmony created by the whitewashed houses, bright on the blue skies and sea background, decorated with dozens of colorful wooden shutters in perfect hues.

The gardening on the island is minimalistic and precise since there is a real problem with fresh water for watering the plants, as well as strong winds in the winter. Despite it all, they manage to create an amazing effect with a vegetation which strikes you with its liveliness on the white walls and streets.

At the entrance of every house and on every porch there are pots with spices and herbs, as well as cats, lots of fat lazy cats that dot the island and act like the real landlords.

We stayed in the charming family hotel Anemomylos, in the large and beautiful village of Naoussa. Just a short walk away from the beach and the tourist filled alleys of the village.

When you’ll get tired from the resting and wondering the alleyways between the beach and the small shops, and from staring at the ducks which patrol the small stream between the coffee shops, I recommend you rent ATVs and spent a day exploring the island. Every bent in the road hides a new lagoon with new breathtaking views.

One moment we climb the mountainside, and the next we discover a new unknown beach. One is sandy, the other rocky, blue taverns dotting the roads and bays, inviting you to stop by and have a glass of wine and fresh fish right from the nearby sea.

Most of the shops and restaurants on the island can be found on the capital city of Parikia, where the ferry from the mainland disembark, and Naoussa where we stayed during our visit. The cities are about a twenty-minute drive away from each other. A lot of small boutiques with clothing and jewelry with an ambiance of a vacation, plenty of restaurants, most of which are nice but pretty basic and not noteworthy. Only one restaurant in Naoussa is worth remembering, Yemeni Taverna, serving authentic high-quality Greek food, and you should book a reservation ahead of time. We really enjoyed it, and even return more than once.

After a week in Paros, which fulfilled the promise of an enchanted Greek vacation, we left the island and sail towards four days in Mykonos.

In full disclosure, Mykonos wasn’t how I remembered it. You could say I remembered it similarly to my resent experience in Paros. Maybe it was because the popular island wasn’t closing up, the whole vide felt a lot more touristic. The island does have chic hotels and shops filled with luxuries, but the town itself (Mykonos City) there are countless tourists’ traps, and very little authenticity.

Tanned and relaxed we returned to Athens. The city has a mixture of a European scent mixed with wilder and sweatier Mediterranean scent. You can feel the shaky economic status of Greece, in shoddy maintenance, near poverty and a general look which is reminiscent of southern Tel Aviv. Inside this chaos you can find some pearls here and there, but in general, I would have it on my list of favorite destinations. Despite this unenthusiastic introduction, here are some recommendations in case you decide to visit it for a few days on your way to the islands, like we did.

After a breathtaking trip to the Acropolis and in the Plaka’s alleys beneath it, I recommend you go to the top of the hotel A For Athens, where you’ll be able to sip on a cocktail while the whole old city is spread beneath you. An excellent place to start an evening during sunset.

We really liked the boutique hotel In(n) Athens, which was opened last year. It stars the monochromatic characters of materials such as concrete, iron and stone, which are fused into the European architecture of the original structure. It’s designed with clean lines around a charming and intimate inner garden with a large tree at its center. 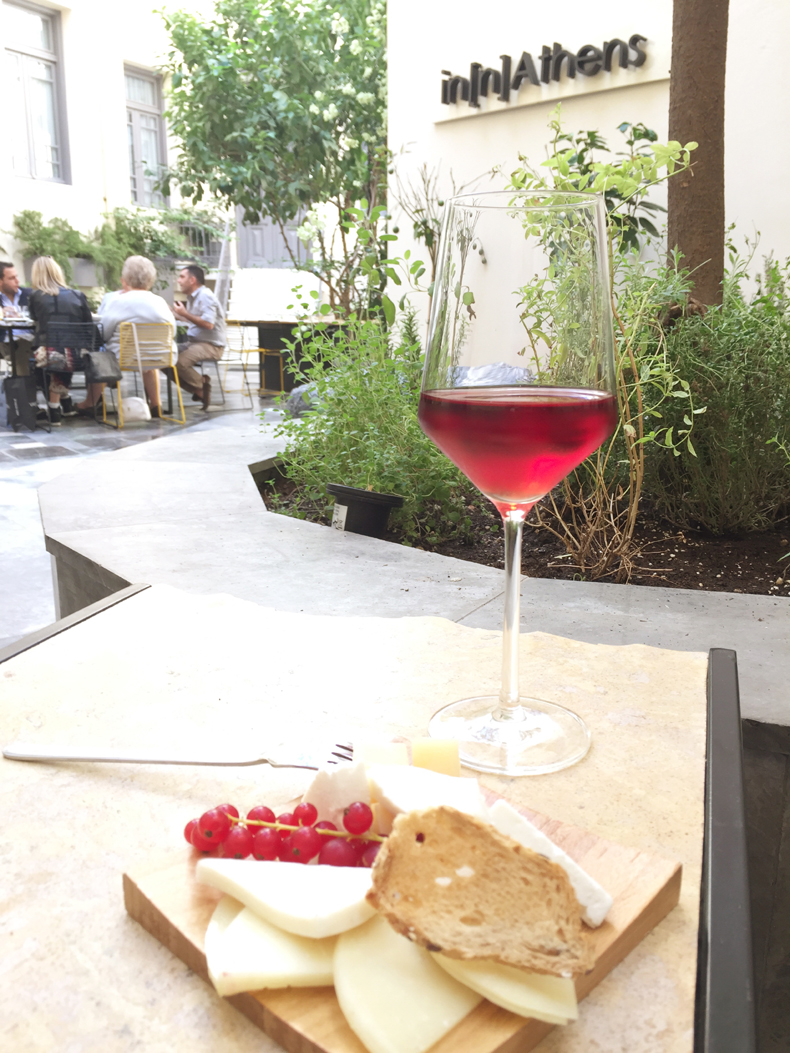 Believe me when I say that no matter how much I dug and looked for recommendations for modern restaurants, I couldn’t found any. Even with locals’ recommendations the best we could find aren’t worth mentioning. In the end, in the sea of Souvlaki and Greek Salad, the best surprise was found in a small side alley.

A long time ago, when not everyone had a fridge, Athens was filled with “milk bars”. They sold yogurt, ice cream and milk-based desserts. The last remaining milk bar we found thanks to a tip in a Greek cooking book, the small coffee shop, called Stani, was opened in 1931, in a less attractive area, but worth the walking effort. In around 30 euros, eleven people enjoyed excellent and dreamy drinks and desserts. That’s the taste that stayed with me from the vacation.

I admit that I usually enjoy vacations filled with walking and exploring both cities and nature rather than ones filled with nothing but relaxing by the beach or the pool. Which is why I found it challenging to change gears and just relax, because the sunsets were golden, but the time we spent together even more so. This is the real charm and the real reason to go on a vacation together.